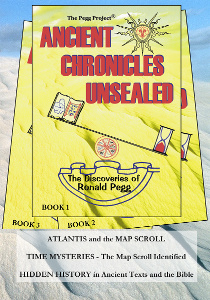 An overview of seven years of Pegg's discoveries and findings which reveal that Mesopotamian, Sumerian, Babylonian, Akkadian and Hebrew God stories involved time travel encounters and often report the computer technology taken back with them.

In several groups of texts, (deemed sacred by many) such as found in the Old Testament, the New Testament, the Qur'an, the Book of Mormon, and other religious writings, Pegg found that the time travellers themselves were perceived as 'angels, 'elders', or the 'voice of God'.

Written in 2003, this set of books was researcher and author Eddy Pengelly's first attempt to summarize Pegg's seven years of findings.

Using Pegg's method of 'following the clues', this book slowly identifies the puzzle pieces and finally reveals in which ancient texts encounters with time travellers and modern computer technology have been found.

Has one of your favourite ancient mysteries finally been solved ?

Are accounts of time travellers reported in your Faith's religious writings ?

Four CD-ROMS taken back to the past are comprehensively described in many ancient and sacred texts.