Each query or question is in large bold type

Ronald Pegg has rearranged the words, changed the meanings, and taken it out of context

No. The original Hebrew word order is the original word order. Modern Bibles have got it wrong.
No. Primary Hebrew meanings are the original intended meanings. Modern translations are wrong.
Moses knew of the Egyptian gods. 'Deities' (plural) is in context with his understanding of his time.

How can Pegg be right ?

Ronald Pegg has used their English religious text (KJV Bible, 1611 CE), used their reference book (Lexicons in Strong's Concordance, late 1800s), and used their rules (as stated in the Lexicons).
Using the original primary Hebrew and Greek meanings, how can this not be correct ?
The question to the KJV Bible translators is - Why did they NOT use the primary meanings ?


If Joseph Smith Jnr. in 1827 saw two compact disks in their plastic jewel cases, I want to see the proof ! 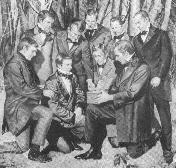 Two clear plastic cd jewel cases (without their base-plates) are being held by a group of people in the mid 1800s. This picture shows Joseph Smith Jnr. and Eight Witnesses.
Source: page 27, Truth Restored (6/95), a Church of Jesus Christ of Latter-day Saints Publication, U.S.A. 1995 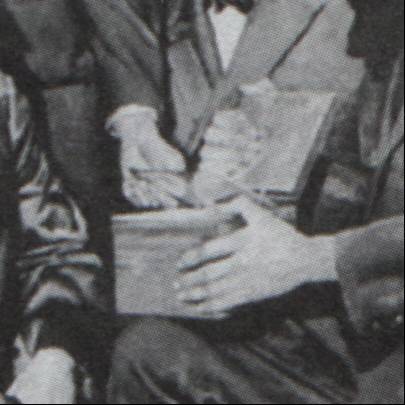 Historically, while plastic (polystyrene) was discovered in 1839, the use of injection-molded polystyrene to make cd-cases did not occur until after compact disks were developed in 1981


Doesn't this all just comes down to a choice between what Ronald Pegg thinks and what scholars think ?

No. What scholars think is based upon the 'given religious meanings' as can be found in various modern Concordances and other Bible commentaries, often being based upon what their own religious views may dictate and/or what their religious tradition says.

Ronald Pegg did not write Strong's Exhaustive Concordance nor provide the original Hebrew and Greek word meanings as found in its Lexicons. Pegg has not made up any meanings. He is clearly citing what is printed in the Lexicons, being either the word's original root meaning or the meaning based upon its etymological context.

Plain and simple (which you can easily confirm for yourself), in many, many cases, scholars have NOT used the original Hebrew nor Greek word primary root meanings.

As Mr Pegg is using the same resource that "pastors, scholars, and laypersons have been using for over a hundred years", it is not a case of 'what Pegg thinks'. What is surprising everyone is that when the original Hebrew and Greek root meanings of words are employed (instead of the traditional implied religious meanings), a different message begins to be revealed. That original message validates when compared to the contents of a particular modern cd-rom.

You can not use Strong's Concordance to translate the Bible.
Scholars who know how to translate from the Hebrew and Greek are the only ones who can do this correctly.

This is said by religious scholars who support the contemporary translation of the Bible, who were brought up in the already religiously biased system, and who continue to employ the same 'methods of translation' as taught by the same religious institution (whose origins date back to the Holy Roman Church).
Unfortunately they are just repeating (in their methods of translation) the same mistakes made over 400 years ago and perpetuated from the earlier religious rhetoric (and closed mindedness) of the Roman Church that decided what 'ancient manuscripts' were to make up the Bible, and what 'traditions' and 'Church rules' were to be used. (ie. the made-up stuff we have discovered that made it look like it was talking about 'heaven & hell', a God, Son of God, and Holy Spirit, etc.)

The 'interpretation of the original ancient texts' was done by the early Roman Church which then made up the rules on how to translate (the already misinterpreted stories) of the Hebrew and Greek Testaments into Latin.
They then pushed their own religious bias not only on the New Testament context, but back upon the Old Testament context (as we have seen on this website).

The fact that the Roman Church destroyed all the original manuscripts once the Latin Vulgate version Bible was released shows to us that the original texts said something different.

The original primary Hebrew and Greek root meanings were once again known in the mid 1800s and appear in the Lexicons of Strong's Concordance. It baffles us as to why modern religious scholars chose NOT to use them to correct the religiously perceived translation of the 1611 KJV Old English Bible.
It seems Ronald Pegg is the first to do so, and unlike the "stories" portrayed in the traditional renditions, his use of the original Hebrew and Greek primary root meanings exactly match to something physical that we all can validate for ourselves.

Is there any other proof that the Sky/Sea picture of the cd-rom is associated with the Genesis story ? 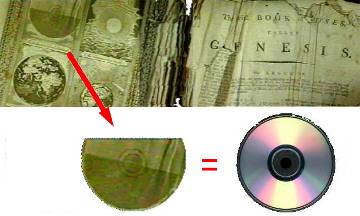 How can you come to the conclusion that an 'Angel' was a time traveller?

In Lesson 7 (on the Step 3 page) six encounters with a messenger are listed. The descriptions given by each named historical person match to the contents of a particular modern cd-rom.
Ronald Pegg discovered the same imagery from that cd-rom described, documented, and depicted in over 30 ancient texts during a 5,000 year period of our history from all around the world.

For the contents of a modern object to be recorded in many ancient texts from different times, and for the same mesenger named Gabriel to be present in three different time periods - some form of Time Travel has been at work. (The How and from When we do not know.)

No. This website has presented only a few examples (25 key words from 10 verses) from one chapter of Genesis.
A comprehensive explanation (of Genesis Chapter 1), 37 keywords from 22 verses, can be found in chapter two of the report entitled A New Perspective - The Bible and Nostradamus, Eddy Pengelly, PPHC, Adelaide, 2004.

Ronald Pegg says
Modern technology documented in earlier historical texts - is proof of Time Travel
and presented these cases where
one particular modern object has been found documented back in these times...

That object was the 1995 produced Ancient Civilizations of the Mediterranean cd-rom.


I dont see how this can be purported to be evidence of anything more than the CD graphics based on an ancient text (eg. the Bible)

One set of matching details could just be a coincidence, and could be the result of the makers of the cd-rom using one particular set of ancient descriptions as their source and inspiration.
Maybe also two or three (or four) could be passed off as 'just coincidences'.
But over twenty ancient sets of details from different time periods and countries matching is beyond coincidence.

The same set of descriptions turn up in many ancient stories where most are associated with a messenger turning up in a bright light (or 'dream') carrying a stone of testimony (aka. wheel, tablet, plate, or disc) which tells of future things and provides 'visions'. These extra associated characteristics indicate that the same source was viewed by all the ancient writers and story tellers by the same means - and not that any one ancient story was the source used by the makers of the cd-rom for their imagery.

Regarding people's own conclusions, we are often asked, concerning the observed evidence from our research as being identical or very close to the Ancients cd-rom pictures...

"Is the imagery, on the cd-rom, evidence of someone or a group of people travelling back in time and showing the ancient people the images from it, or was the Ancients cd-rom created by people that have read any or all of the texts? They may have only been inspired, even subconsciously, to make the cd-rom the same or very similar to what is in the ancient texts."

The civilizations presented are from around the Mediterranean region from betwen 2000 BCE and 476 CE, being Etruria, Carthage, Roman Empire, Greece, Phoenicia and Egypt.
(The Egyptian section only presents seven video shows, and not pages of pictures.)

Specifically...
Regarding: "Is the imagery, on the cd-rom, evidence of someone or a group of people traveling back in time and showing the ancient people the images from it."

Based upon 15 years of investigations - our conclusion is yes. In the Old Testament (Ezekiel), New Testament (Revelation), and Qur'an (Mohammed) encounters where the cd-rom imagery is described, there is an Angel reported as being present, and in the Bible accounts, this angel has a 'sealed book with seven seals' that is opened, and from which 'visions' are seen by the prophet. That prophet's descriptions of these 'visions' are of the contents of the Ancients cd-rom.

We conclude that this 'angel' is some form of [human] time traveller.

Because Pegg is an unknown researcher without qualifications, doesn't what he says therefore prove nothing?

It is not a matter of 'what he is saying' as he is simply pointing out that (for example) when the original Hebrew and Greek meanings as found documented in the Lexicons of Strong's Concordance are used instead of the given traditional religious meanings, messages hidden beneath the layers of traditional religious interpretation and rhetoric are describing encounters with time travellers showing selected ancient people the contents of several cd-roms on a desktop computer.

When the Bible's word meanings are checked, many are found NOT to be the original meanings.
When the revealed 'original message' is compared to the contents of the Ancients cd-rom, there IS a match of descriptions to images. The 'Book with Seven Seals' case study returns over a 90 percent positive result. So the evidence itself proves the claim.

To put it another way, using the scientific method, anyone can use the resources cited, conduct their own investigation, and reproduce the results for themselves. (Often called peer review.)

All these ancient written testimonies were produced before Pegg was born and the modern books published before he knew of them, hence he had nothing to do with any of the input into any of those resources.
The evidence existed before he discovered it, hidden beneath 2,000 years of religious rhetoric.
The Australian researcher known as Ronald Pegg just happened to be the person to find it.

Evidence shows that  TIME TRAVEL  Back to the Past  has occurred !

The Pegg Project® has a vast amount of research that will be slowly released to the public.