Comments regarding The Bible

But we already know the Bible is a load of hogwash !

The Bible is the word of God !

Two opposing views from Atheists and Theists ..... both are wrong

(Atheist...holding an English BIBLE and asserting...)  This book is full of fairy tales and fiction

A seemingly fair comment based upon what religious people tell us the stories are about, BUT we have only based our opinion upon what they have told us, and what is written in English.


WHY are you taking their word for it - and getting sucked into their belief system ?

Wouldn't it be better to make your own judgments based upon the original meanings and context of the Bible's ancient texts themselves that YOU can personally validate ?

The PROBLEM has been Isolated

It was further exasperated in 1611CE with the publishing of the Bible in English, and has been perpetuated for over 400 years with each new translation of the Bible.

Often the original Hebrew (and Greek) meanings and context have NOT been used !

The SOLUTION has been found

Hidden in plain sight beneath the traditional interpretation of the Bible's words are the Keys to resolving ' Is God a supernatural being ? ' and the ' Evolution versus Creation ' debate.

If you can read an English Bible and isolate a certain word and navigate through a dictionary to find the corresponding information, then you can find these things for yourself.


WHY then, should you personally read and examine the Bible's words ?

(Theist...holding up an English BIBLE and shouting...)  This is the original WORD of GOD

NO it is not
It is in English, and therefore not the original words written in the indigenous ancient languages of Aramaic, Hebrew, and Greek. There has been a translation and interpretation process involved.

They are modern man-made religious publications where:These 'translation fixes' have covered over the original meanings and context

When you look past all the religious rhetoric and mistranslations you can reveal its original root meanings and intended context. What becomes evident is a historical record that reflects ancient times and a certain way of thinking that can be used to shed light on age-old mysteries.

ONE WORD translated wrong has changed the meaning and context

Why would you bother to even check just one word from the Bible ?

Because it reveals the ancient intended meaning is NOT what we have been told, and that the whole related religious concepts told to us are misleading.

One word is HEAVEN

God is mentioned throughout the English Bible, as too is Heaven.

We have been told that the Bible portrays the idea of a constant struggle between good and evil and that we have to be consistently perfect to go to heaven - or else !
This is told to our children to scare them and to keep them in fear of doing the wrong thing.

Do you want these types of stories to affect your children's mental health ?

They made it up !

Here is what you will find when you seek out the original intended Hebrew and Greek meanings of the English word 'Heaven' from a Biblical Dictionary
'SKY' is the primary original Hebrew AND Greek meaning of the biblical word HEAVEN, and not a supernatural residence !

It was only by religious 'extension' that the meaning of 'abode of God' was added as a concept to the New Testament's word 'sky'. (To put it bluntly - they made it up)
For 1200 years prior to that 'heaven' in the Old Testament simply mean 'sky'.

'HEAVEN as the abode of God' is a myth implied (by extension) by religious Christians and was not only included in the New Testament as a new concept, but has also been imposed back upon the Old Testament's stories during translation which has changed the context of the original Hebrew accounts.

Why would anyone accept the meanings from a biblical Dictionary ?

It is not just any dictionary.

Why not use the same Reference Books that Religions employ ?
In that way we will then be on the same playing field. We will use their own texts, their own resources, and their own rules to prove them wrong.

To find the meanings of his original French words in English, we need to use a French Dictionary.

By looking up each meaning we can begin to reveal what the original French words (and/or their etymology) meant within the given context.


EGYPTIAN HIEROGLYPHS are not words but drawings. 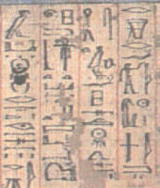 To find the English meanings of ancient glyphs we need to refer to a book on Egyptian Hieroglyphs.

From an ancient papyrus we can then compare glyphs referenced in this book to reveal their original ancient meanings.

THE BIBLE was written in Hebrew, Aramaic, and Greek. (Then translated via Latin into English.)

To find the original ancient meanings of words in the Bible we need to refer to the respective Lexicons in Strong's Exhaustive Bible Concordance.

By looking up each meaning we can begin to reveal what the original Hebrew or Greek words (and/or their etymology) meant within the given context.

Why use the King James Version Bible ?

We are not using this version because it is better than any other version. It is not.
The translated words used in the KJV Bible have each been numbered.
This provides a quick reference tool when finding their original meanings.

Why use Strong's Concordance ?

"Strong's Exhaustive Concordance of the Bible has been the standard Bible concordance for pastors, scholars, and laypersons for over a century....It indexes every word of the King James Version..."

Each word often shows its root, the word as it appears in its original spelling, its transliteration (ie. the word represented in English letters), relationship to other words, various renderings of the word, and idioms peculiar to the Hebrew or Aramaic.
Shown first is the original root meaning followed by the religiously deemed English meanings.

Why use these two particular resources ?

While the KJV Bible of 1611 is historically the third Bible to be translated into English, it is the earliest translation that has all the words numbered and referenced.

Bibles since this time have been retranslated and reinterpreted to suit the aims of various Religious groups.  They do NOT reflect the original contexts and meanings.

We use the paper version of The New Strong's Exhaustive Concordance of the Bible, Thomas Nelson Publishers, Nashville, Tennessee, 1997.
It was the work of Dr James Strong from the mid 1800s.

Some modern concordances (just like Bibles) have been amended to reflect the context and views of particular modern religious groups.  Hence the original ancient meanings are no longer available in those editions, only the common modern religious interpretations. This is why we use the paper version. The links given later in this study have been checked to see that they do in fact reflect the original works of Dr James Strong. (Correct at the time this article was written)

We will be checking the original word meanings from the same resource that Religious Scholars have been using for over 100 years.

How then have they got it so wrong ?

Another word is SPIRIT

Spirit   is "the part of a person that is alive, which we cannot see; there are spirits that we cannot see; they can be good or bad; God's Holy Spirit that Jesus promised to send to all who know him as the Son of God; nobody sees the Holy Spirit but he joins with the spirit of those who know Jesus; the Holy Sprit helps a person to follow Jesus and to do good things."

OK. This is what we have been told for as long as I can remember. Let's confirm this by checking the original primary meanings of the words from the Lexicons of Strong's Concordance.'WIND' and 'CURRENT of AIR' are the primary original Hebrew AND Greek meanings of the biblical word SPIRIT, and not a divine God or Holy Spirit !

'Breath of Wind' and 'Spirit of man' (ie. rational being / human spirit) are valid secondary non-religious meanings. Both the Hebrew and Greek show this.

But a 'divine or superhuman Spirit' is a religiously added concept via 'implication'. This means the idea was implied by someone even though the original meanings did not convey it.

They have made it up - again !

(Presuming you followed and checked the links)  YOU have just found the evidence for yourself, using Religion's own reference book for the Bible, that

the primary original ancient intended meanings have NOT been used

Ronald Pegg found that many of the words within the King James Version Bible have been translated using religious concepts and interpretations and NOT the intended ancient meanings.
This has been confirmed to be an accurate statement.

Therefore, what we have been told via our English Bibles by our many and varied modern Christian Religions is not what the Bible's words were originally describing !

'Heaven' as the abode of God was introduced by the early Roman Christians to fit in with their new trinity of God religion, some 1200 years later.

The Old Testament was never talking about a divine supernatural Holy Ghost.
It was simply talking about either the WIND or the Spirit of Man.

'HEAVEN as the abode of God' and a 'superhuman or divine Holy SPIRIT' are myths extended and implied by religious Christians and have been included in the New Testament as concepts.

They have also been imposed back upon the Old Testament's stories during translation which has changed the context of the original Hebrew accounts.

So what were the Old Testament stories originally reporting before their meanings and context were changed ?

You now know how to discover for yourself the originally intended meanings of the Bible's Hebrew and Greek words that appear to us in English in our modern English Bibles.

Continue to peel back over 2,000 years of religious rhetoric by returning the Bible's words to their original primary Hebrew and Greek meanings.

Our special publication entitled The Bible Decomposed - Hidden Secrets Revealed continues these lessons:
Lesson 3 - the religious meanings of 'Hell' and 'Devil' have been made up too.
Lesson 4 - the biblical 'God' was not a supernatural being.
Lesson 5 - 8 - the Creation Story was not describing the formation of our planet in six days.
Lesson 6 - A history lesson. What else was going on around the time of the Moses story ?
Lesson 7 - A biblical Angel is not what we have been led to believe.
Lesson 8 - The 'deities' identified and the source of the Creation Account revealed.
plus 8 more lessons.