The Concealed Story in Ancient Texts

To some time in the past (about 5,000 years ago) a time travel trip was undertaken. 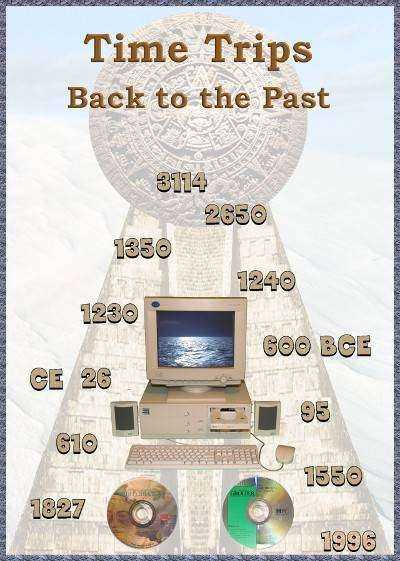 Australian researcher Ronald Pegg discovered that the same computer technology as taken back that first time, was similarly described in many subsequent ancient legends, myths, and stories.

Throughout history, this is reported where 'gods', an 'angel', or 'god' appeared in a bright light with two 'books of the future'. They then showed the visited ancient person certain pictures from them via a special oracle. Also divulged were selected historical events. Instructions were then given to write down what was told and seen.

Unforeseen, each time those 'writings' became the source that spawned a new Religion. (See dates show on the left side of the picture.)

Subsequent visits back to the past were meant to correct the earlier mistakes and misunderstandings, but the time travellers were again perceived as 'angels of God'.

After 1827 there were now at least six world Religions unintentionally formed. To correct these and other mistakes without destroying the current timeline, a second series of trips back to the past were undertaken. (See dates shown on the right side of the above picture.)

In contrast to the previous time trips, now the visited selected people were instructed to conceal what they were shown and told in their personal chronicles, as people at the end time will discover those encoded words and decipher them. One of those people was Ronald Pegg.

This book identifies 18 time trips back to the past, and reveals which ancient texts report those Time Travel encounters.

WHY
To point out previous misunderstandings that took place during and after those time trips in order to redress the many unforeseen consequences - without changing the current timeline.

This brief 40 page preview and summary scenario publication also reveals the specific computer technology taken back with them.