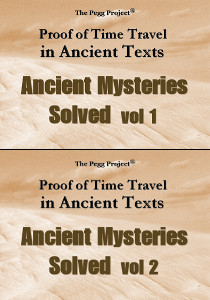 Ronald Pegg's hypothesis specified that a 1990s computer system and three cd-roms were taken back to the past by human time travellers, with various pictures from each of them being told and shown to certain ancient people.

Eddy Pengelly was the first researcher in the 21st century to investigate these assertions. So far he has personally scrutinized over eighteen of the cited ancient accounts and has made further discoveries of his own. This section presents the first thirteen verified accounts. (See the Bible Mysteries section for the other five.)

Read for yourself what Pengelly saw, as he sat in front of a computer running the various cd-roms and compared what was seen on the computer's screen to what was chronicled in the particular ancient text being examined.
9 eBooks present proof 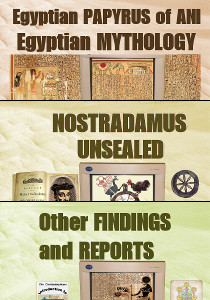 Nostradamus obtained his 'future information' and describes a computer as the apparatus utilized to do so. See where his described events from Quatrains and his other works match to actual Historical Events of the 20th and 21st Centuries.

Ezekiel's Wheels - Not a UFO

plus Other Findings
BUY eBooks for proof 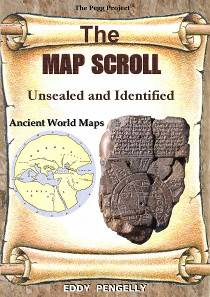 The Map Scroll - Unsealed and Identified

Ronald Pegg discovered a series of clues that brought a whole new perspective to the origins of ancient myths, legends, and certain Bible stories.

He found that the same OBJECT described in the Bible (twice, in 600 BCE and 95 CE) was also documented in Mesopotamian and Egyptian stories from 3100 BCE and 1240 BCE, and in 1550 CE France.

From an ancient perspective Pegg called the depicted and described object the MAP SCROLL and went in search of the actual physical object - and found it.

This secular, non-religious study solves the mystery regarding what is known in the Bible as the Book with Seven Seals.
More DETAILS 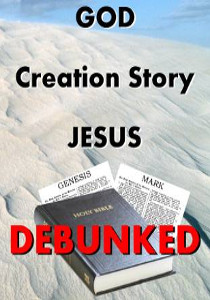 From a general and secular point of view (and for the purpose of this explanation) ancient texts refer to any and all ancient stories, myths and legends that have been written down and exist (or existed) in some form of documented publication. This includes what some people deem to be sacred books such as the Hebrew, Christian, Muslim, and Mormon Bibles.

Thus, as far as Ronald Pegg was concerned, the books and stories in all those sacred chronicles were just another set of ancient texts to scrutinize.

Having found evidence of time travel in over 28 other ancient texts (including many other books from the Bible) he eventually came upon the Genesis and Mark narratives.

Like the other 16 now validated Case Studies, these two accounts were also spawned due to time travel encounters.
BUY eBooks for proof
Please  LIKE  Ancient Texts Reveal their Secrets  on