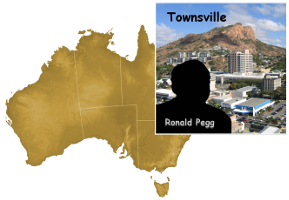 Australian researcher Ronald Pegg discovered a series of clues that brought a whole new perspective to the origins of ancient myths, legends, and certain Bible stories.

The Object was first reported and drawn as a 'map of the known world' such as these:

It was also known as the Tablet of Destiny, a Seer Stone, Sun-Disc or Philosopher's Stone, the Wheel of Destiny of Nations, and in certain Bible stories it was portrayed as either a Tablet, a Scroll, or a Sacred Book; and often associated with it were 'Dreams & Visions of the future' commentaries.

In the Book of Revelation (5:1, New Testament) it is reported as "a scroll written inside and on the back, sealed with seven seals".

Our main Article allows you to follow the clues from ancient Babylon to first century Greece that led Pegg to his amazing findings, which include that the perceived 'Angels' in the Bible were Time Travellers and the reported BOOK was real - and was from the late 1990s.

HOW ?   He put aside all the traditional religious rhetoric of the past 5,000 years - and personally checked for the original Hebrew and Greek meanings of the mistranslated KJV Bible.

He suggests that you investigate it all yourself, and cease taking the traditional biased religious 'Chinese Whisper' stories as being what happened back in the past.
Conduct your own non religious Bible Study - Check the words for yourself.

The above ancient myths, legends, and certain Bible stories are NOT of supernatural origins - they are simply misunderstood accounts of human time travel encounters back in the past, where the same mid 1990s 'book' was taken back and shown to ancient people as a warning regarding the future.


Since the 2011 article was written (from which the above information was sourced), it has been compiled into an eBook and an associated online interactive WORKSHOP has been made available.

Read the book then validate the visual evidence, using your own computer.

The MAP SCROLL Unsealed
- the Book with Seven Seals Identified

Purchase as a  Downloadable PDF file

Link to Workshop listed on rear page of the report.