When completed, there was so much collected data and findings that the results had to be organized in three parts.

Several texts were found that do in fact document time travellers from the future and contain associated prescient content. A named human time traveller was identified.
Those positive results revealed that time travel back to the past has taken place.

A mid 1990s desktop computer and associated compact disks were identified as the reported apparatus and artifacts.
Those positive results demonstrated that particular computer technology was taken back to the past and shown to certain historical people.

A selection of ancient texts that contain accounts of compact disks was collated, with their characteristics and described contents being extracted, compiled and listed. Those features were then compared to various compact disks in an attempt to find the one being described.
A particular 1995 multimedia cd-rom was comprehensively identified. This positive result demonstrated that a particular cd-rom from the mid 1990s was taken back to the past and shown to certain historical people.

These disclosures will provoke a change in thinking in the scientific world regarding the topic of time travel. 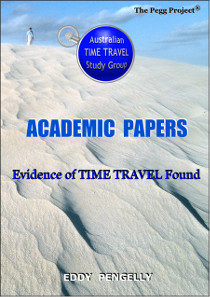