South Australian researcher Eddy Pengelly (pictured), has completed an investigation regarding an earlier claim that the ancient Egyptians depict computer technology in their hieroglyphics.

He conducted an examination of one hundred and twenty eight glyphs from the entire first three columns of the Papyrus of Ani.

The claim was that this 'Sun disk' glyph was not a representation of the Sun but instead was a depiction of a specific piece of computer technology - a data disk.

Pengelly not only validated this hypothesis, he found other glyphs depicting and describing other particular computer parts such as a mouse & cable, a protruding cd-drive tray, a monitor, and the black base of a plastic jewell case.

He also discovered that the traditional meanings stated by Sir Alan Gardiner (Egyptologist) regarding deemed determinative or phonetic meanings for over thirty five glyphs were not accurate.

During the translation process, a new term was coined - Charogram.
This is a pictogram that represents a specific characteristic of the depicted physical object.
In contrast to a traditional determinative, which is associated with a GROUP of glyphs in respect to their phonetic soundings, a 'charogram' is associated only with ONE glyph and represents a direct feature of that one glyph.

The findings in Pengelly's paper confronts religious beliefs that have been held for many thousands of years, questions the traditional translation methods regarding Egyptian glyphs, and will challenge scientific understanding as to how identifiable modern technology has been documented back in the past by an Egyptian scribe in 1240 BCE. 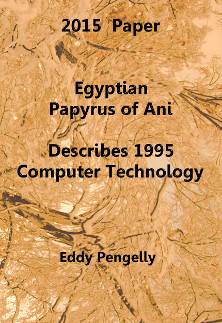