Queensland researcher Ronald Pegg discovered reports of human Time Travel activity and their computer technology documented in over 25 Ancient Texts that span 5,000 years of our history.

South Australian researcher Eddy Pengelly (pictured) confirmed Pegg's findings but surprisingly identified a Second Pattern of Activity relating to these time-trips back to the past.

Pegg found that the primary Time-Trips had inadvertantly caused Religions to form due to the visited ancient people misunderstanding and perceiving an appearing Time Traveller in a bright light as being an Angel or God.
Examples of these include ancient Mesopotamian and Egyptian 'god stories', the 1230 BCE Hebrew and 610 CE Muslim 'God' accounts, and the 60 CE Christian 'Son of God' story.

The secondary time-trips as identified by Pengelly, were undetaken to try to correct these mistakes.
These include two visits to ancient Egypt (in 1350 and 1240 BCE), four visits around 600 BCE to Babylon and Jerusalem, a visit to Greece in 95 CE, two visits to France in the mid 1500s, and a visit to America in the mid 1800s. Most of these secondary visits are known as the 'prophecy with dreams and vision' stories.

Pengelly's REPORT reveals 18 Texts that document these findings and answers the question: which of these Secondary Trips are documented in your Religion's sacred text ? 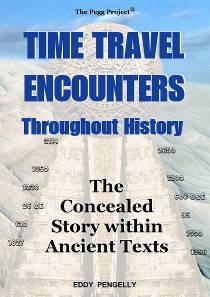 Purchase as a  Downloadable PDF file