God and the Creation Story - EXPLAINED 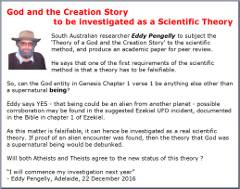 South Australian researcher Eddy Pengelly (pictured) has completed his task (announced in December 2016) to investigate the God and Creation Story from the Bible.

Citing a possible UFO description in the Book of Ezekiel, it had been proposed that the God of the Bible could have been an alien and not a supernatural entity as religiously believed for over 3,000 years.

As the traditional supernatural claim could now be falsified, the scientific method was now able to be employed to investigate this matter.

The GOD stories in the Bible were not about a supernatural entity or an alien, but relate to accounts of human Time Travel interactions back in the past.

The debate is now over - there is and never was a supernatural GOD as traditionally believed. 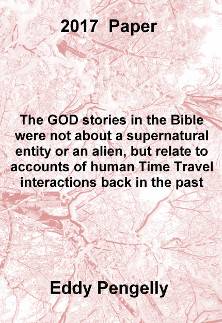 READ Preprint as a PDF file