Quest for  The Book with Seven Seals 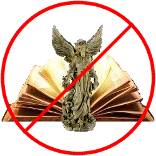 What if the Bible was a record of Time Travel encounters and NOT stories of supernatural visits ?

Australian researcher Ronald Pegg asked then addressed this question by searching for the actual physical object held by the messenger as described in the words from the New Testament's Book of Revelation.

When Pegg checked for their original Greek meanings as stated in Strong's Concordance he found many words in the KJV Bible have been mistranslated.

He then discovered other previously unknown descriptions of the 'future book' in the Old Testament books of Ezekiel and Daniel.

Now with the knowledge of 11 reported characteristics for that 'End Time book', Pegg was able to identify what type of 'book' was being reported by these biblical writers. He then found a physical modern 'book' that matched all those ancient descriptions.

The reported and described future 'book' chronicled in the 95 CE Bible text of Revelation, and known as the Book with Seven Seals - has been Found and Identified.